I have a special treat for you! Samantha Heuwagen is debuting her first novel with our publisher, Trifecta Publishing House. Her first book, Dawn Among the Stars: The Starless Series releases on May 21st, 2018. I feel so excited to have another author added to the Trifecta family, and so should you! Please enjoy this guest blog by Samantha Heuwagen about her book and her professional life. Get your copy of her book today!

“I need help,” the voice said over the phone. “I need to talk to someone about my problems.” As a mental health clinician my mind raced to set the call up for success so I could get them into my office and start their journey towards healing.

You see I work with a variety of mental health problems as a sex therapist. From depression to sexual trauma I’ve been

able to help many people change their lives and reclaim their power. I’m extremely lucky to work in the profession that I do, but I can’t help thinking: does the outside world understand what I do?

The answer is no.

The looks I get usually fall into two camps. Either people love the idea of talking to a therapist–– free therapy! Or they clam up and try to change the subject. I’m used to it now, but it’s still interesting when it happens. And yes it tells me a lot about you, so watch out if we ever meet in person.

Because of this muddled confusion Dawn Among the Stars was born. Alright, you caught me––in reality I had this dream that wouldn’t let go! Yet as I figured out the characters and their hopes and dreams, I realized they all had something in common. They were all dealing with some type of mental health issue while trying to understand the Universe around them.

I quickly understood I wasn’t just writing about aliens––though there are aliens and they’re awesome for the most part. I was writing characters that were taking care of business, fighting for their lives, and falling in love, all the while dealing with really serious mental obstacles; doing it all with class, integrity, and intelligence.

It felt natural for me to write about mental health in a realistic way because it’s time for the discourse surrounding mental illness to change. If treated, people can live happy and healthy lives. But unchecked it can suck the life out of someone and their loved ones. It’s not a sign of weakness to see a helping professional; it’s quite the opposite. It takes strength and a solid sense of self to ask for help.

In today’s media there are no positive images of someone successfully navigating the difficult road to wellness. Dawn Among the Stars changes that by showing a heroine fight through her panic to challenge the world around her. It depicts a man struggling to understand his complex emotions and come out the other side better for it. It showcases a family open to diversity to help them reclaim their sense of safety. The three main characters go through hell to save their beloved planet yet still manage their mental illnesses.

Dawn Among the Stars is a love story, but not in the traditional sense. It’s a love story about wellness and doing what is right to keep a strong sense of peace while battling mental health and aliens. 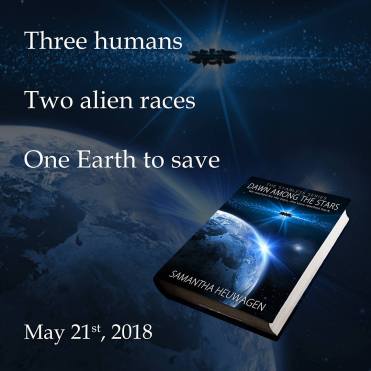 Samantha Heuwagen works as a Marriage and Family Therapist and specializes in Sex Therapy in Atlanta, GA. She is a graduate of Mercer University School of Medicine where she earned her second Master’s degree in Marriage and Family Therapy. Her first Master’s degree is in Women’s and Gender Studies from the University of South Florida where she first realized her passion for sex education. She is a certified sexologist with the American College of Sexologists. When she isn’t working with clients, she teaches at Kennesaw State University sharing her knowledge about sex and feminism. Her debut novel, Dawn Among the Stars, the first in a multi-part series, releases May 21st, 2018 through Trifecta Publishing House. 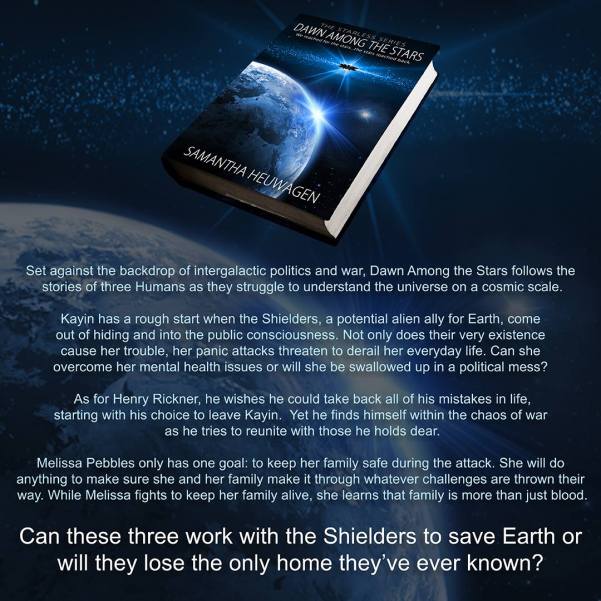 It’s already the latter half of March! The year is flying by and I can’t seem to catch up. However, that doesn’t mean that I’m not meeting deadlines and thinking of more fun and sassy ways to entertain you.

I have a couple of announcements for you to look forward to this upcoming year, that I’d love to share with you:

First off, I do not have news about Missing You (a Roxy Summers Mystery #3). I have checked in with my Editor and Roxy’s next adventure is still “on ice,” as they say (hint hint). However in actual news, Trifecta Publishing House has signed on a new author…

ANNOUNCEMENT 1: Michael Wansley, a Seattle hometown favorite. You probably know him much better as rap artist, The Wanz or Teewanz from the song Thriftshop, by fellow Seattle musical artist Macklemore as the gentleman who says “I’m gonna pop some tags, only got $20 in my pocket…” and so on.

If you’re a longtime reader of this blog, you might know that I used to work at the same company as Wansley. I started a year or so after he had left to pursue music. I’ve met him in person a couple of times, and he signed my hockey jersey. (Hockey for life, although I think he’s a fan of my team’s rival. Can’t have everything, I suppose.) I was also lucky enough to be in his music video, “Get Lucky,” (and NO, NOT in the sense you’re thinking of). It’s a song about how no matter what happens in your life, sometimes luck happens and you are able to achieve your dreams… of which I firmly believe also involves a lot of seriously focused hard work on the person’s part. Also, of which Wansley is an incredibly hard worker.

We lifetime fans, ones who are adults now with lives and careers, etc. decided to band together and create our own fan-based game in the spirit of Nancy Drew while we (im)patiently wait for Midnight in Salem to (eventually) release.

Guess who’s on the team? That’s right! ME!

It turns out that a print journalism degree
doesn’t die in vain during the 21st Century!

(And there are other uses for a print journalism
besides providing the world with a debate over
news v. “fake news”.)

Yours truly is acting as an editor of the script for the game. Although I can’t release any details at this time, I can tell you that the script is coming along, and if this game turns out half of what I imagine it will be, I’m super excited to be a part of this! I haven’t worked on a video game before, but since I love them, this is a life experience I never thought I would have.

Working with a bunch of strangers scattered around the country, although isn’t a new challenge for me, has been professionally challenging in a positive way… Especially when none of us have worked together and grouped due to a mutual love of ND PC games. It’s not like when you’re picked out of an interview by a company and they see not only professionally, but emotionally if you’ll fit with their team. This is a true collaboration of styles, experiences, points of view, and goals when we’re sort-of developing this game on a whim.

It started with all of us belonging to a Nancy Drew Games Fan group on Facebook (yes, I’m that nerdy), and we older veteran fans were reminiscing about how ND games would be released twice per year. After being trained to that type of release schedule, waiting over 2 years has been quite the struggle.

After chatting online with each other, it turns out that many of us (mostly) ladies went into either STEM careers, or careers with unique skill sets. We had a variety of people with computer programming, design, artistry, writing (hello!), and business law information to not only daydream about creating our own game, but developing one. (And, incredibly quickly as I’m learning.) The script is already underway and I’ve received a new file to review and edit. As more details come out, I’ll be excited to share them with you.

ANNOUNCEMENT 3: I’m featuring my FIRST guest blogger on my website! Fellow Trifecta Publishing House author, Samantha Heuwagen, is launching her debut novel of Dawn Among the Stars (The Starless Series), and I’ll be having her guest post launch in May 2018 to introduce her to you and to share a bit of her book with you. Again if you follow me on social media (enough hints yet?), you’ll know that I work for a high school as an office assistant in their counseling center. With everything that is happening in the world, I firmly believe we need to remove the stigma of having mental illness(es) or having someone in your life living with mental illness(es). Heuwagen is a licensed professional counselor and will be sharing her background with us a little more later this Spring.

FINAL ANNOUNCEMENT: I’m working on setting up some AWESOME GIVEAWAYS close to the release date of Missing You. Although you wonderful BLOG SUBSCRIBERS will have plenty of opportunities to enter to win one of the ultra-mega-dazzling-giveaway prizes, buuut it helps if you follow me on social media. More details on the actual fabulous prizes and FREE books I’ll be giving away in the abruptly-near-future. (There will be MY BOOKS, of course, and BAKED GOODS, there will be JEWELRY, and more!)

Phew! After typing all of that, I’m a little tired now. How have you been? I would love to hear what’s going on with you! You can always email me at KatherineBacher@gmail.com or leave a comment below.

Share what’s going on in your lives! I love to hear from my readers!

Haven’t read the Roxy Summers Mystery Series? You have time to catch up!
Start with Capture Me and meet Roxy in a case of cat-and-mouse for a grand Seattle adventure! Then, travel with Roxy to sunny Los Angeles for a food competition to die for in her sequel novel, Crush On You! Roxy’s third book, Missing You releases in June 2018. Keep an eye out on my bookshelf page for pre-order links closer to the release date!

Are we connected? No? Well let’s do that!