This Saturday is the 3rd Annual Passport to Romance Reader Appreciation Event, hosted by GSRWA! I love this event. It’s an opportunity to take home a BAG full of books! I’ve gone every single year, and I keep coming back for more. Why?

I LOVE THIS EVENT!

I always go home with an armful of books, freebies, reconnect with author friends, and meet amazing local authors. For those who enjoy atmosphere, there will be book cover models you can meet in person and have a photo taken with them! They’re super nice, always professional, and easy to talk with, or you can stand around and drool at them from the wall. That happens. Do what feels right to you.

As always, there are tons of raffle baskets to win! (Bring cash!) There are some previews of amazing goodies. I saw some Kindles, Echo Dots, and of course, books, books, and more books to win! Partial proceeds from all raffle basket ticket sales benefit the Domestic Abuse Women’s Network in the Seattle area. Help support other women in need, and help us raise money for DAWN.

Sadly, due to budgetary constraints, I will not be able to be one of the hosts and cannot give out free books this year, but I WILL be in attendance as a visiting guest, just like you! (Will you find me? It’ll be a fun Where’s Waldo?-type situation.) If you happen to spot me, feel free to come on up and say hello! I’d love to see your smiling faces! If you happen to bring your print copy of Capture Me or Crush On You, I would be most happy to autograph the book for you! (I always have a trusty pen on hand!) Haven’t read my books? Check out my Roxy Summers Mystery Series books, Capture Me and Crush On You, HERE to read a synopsis! I’d love to introduce you to Roxy’s world!

Here’s a list of a few of the authors you’ll meet on Saturday:

Hope to see you there! I’ll be there with my trusty glasses on.

“A journey is best measured in friends, rather than miles.”

I snagged my girl friend, Caring*, and we drove on down I-405 South. After a week of mostly drizzly rain and bright cloud-covered days, the sky decided to cloud up darkly and dump buckets on Washington residents. Accident after accident lined the crowded freeway.

Downtown Bellevue was hopping as we stopped-started-stopped again, slogged through traffic, and parked underneath the hotel. Before heading to the ballroom, we bumped into Jacquie Rogers, Diane Rodes Garland, and CJ Obray. We had a quick chat before riding the escalators up, up, up to the third floor. The ballroom was decorated with bar tables scattered throughout, each featuring an author and their published works, goodies, and freebies!

Around the edges of the room were a variety of gift baskets up for raffle. Not having much cash on us, my friend bought 1 raffle ticket, I bought 2. We made our entries for the raffle baskets we were itchy to win. The one I entered for contained a Kindle, books, and a bottle of Jameson that was converted into a lamp. I had my eyes on that Kindle… and created a mental list of people to give the lamp. The proceeds went to GSRWA to keep its operations running smoothly.

As the night continued, Caring and I bumped elbows and chatted with some of my favorite local authors, picked up some freebies, including books, bags, bookmarks, pens, candy, chocolate, etc.

The end of the event drew near, and they began to announce the winners of the raffles. A line of male cover models presenting each gift basket and prize to the winners.

We watched one woman walk away with not one… not two… but THREE prize baskets! (She was clearly a a big supporter of GSRWA.)

Curses! Foiled again!  Alas, it was not meant to be, that Kindle and I. No worries, I figured I wouldn’t win anything. However, there were so many free things, I cannot complain. I even walked away with a free, stemless wine glass. Also, oou may not know this about me, but I am a mass contest enter…er. I am fiercly competitive, but a joyful loser, and often win free book contests!

Back to our story…

As Caring and I watched all of the baskets being raffled, there was one last prize. The beefy cover model dudes were lined up, everyone was standing for the last winner to be called out…

Huzzah! Her solitary ticket, a last minute placement among so many other hopefuls, was picked out of the tiny paper bag! She went home with a gift tote, a bottle of Vampire (chocolate) wine, a necklace, and a few other trinkets of winning glory!

Caring and the L.E. Wilson raffle prize!
It features the novel Blood Hunger, first in the Deathless Night Series.

Me, Caring, and L.E. Wilson!
Please disregard the extremely flyaway, frizzy hair of mine.
I didn’t have time to curl it, and WA weather is merciless to hair.

What a spectacular, fun-filled event! Caring was introduced to countless authors who provide so much literary escape, and I was able to reconnect with some amazing people from RWA/GSRWA! It saddened me slightly that I was unable to keep up with my membership to RWA, GSRWA, and unable to attend Emerald City Writer’s Conference 2015, but I have hopes to attend next year.

Passport to Romance is a big hit, and I hope RWA/GSRWA hosts one again next year!

“A book is a gift you can open again and again.”
– Garrison Keillor

That’s right! 2 Posts in 1 week! Who knew it was possible? I’m writing this special blog post in honor of the Evergreen branch of the Romance Writers of America‘s Waterfront Book Festival (RWA), held yesterday in Everett, Washington!

Pilot, my friend Caring*, and I headed up to the Everett Marina in The Cranberry** yesterday afternoon. Spending a good 45 minutes first at The Everett Farmers Market browsing the various vendors vending their volume vestige.

Yeah! How do you like that alliteration? Vindicated! (Mwahaha!)

Although we didn’t purchase anything here, it was fun to check out the stands.

Admittedly, there were a few items I wanted to buy, but I had limited funds put aside specifically for the book festival.

After perusing, we entered Lombardi’s, an Everett Italian restaurant, right there on the marina, and then just outside the restaurant, down the line of the group of vendors. Lombardi’s was kind enough to host the authors in case of inclement weather. After a dry summer, we ended up with torrential rain and blustery winds causing several power outages in Western Washington State. Even now, in the afternoon, I’m still reading posts on Facebook about people still without power on Day 3. I got to see some of my favorite local authors again (Wendy Delaney and Lori Lyn) from the Greater Seattle RWA’s annual Emerald City Writer’s Conference back in October 2014. I also got to meet some of my favorite authors for the first time, and got to meet authors I hadn’t heard of yet for the first time! I also ended up with a huge haul of freebies.

Which is never bad. Am I right?

I’m lamenting the lack of photos, but I was waaay too nervous to think of taking more pictures.

I purchased a couple of books for my friend Caring and I, and then our little group skedaddled out of there.

Should you get the opportunity to go to any book fairs, sales, etc. I always recommend going. Especially if the authors themselves are in attendance! Even though I was nervous, it never ceases to amaze me how warm and inviting the authors are! They’re people, just like you and me, other than the fact they’ve been published – sometimes several times over! I’m always grateful when they deal with a bundle of nerves like myself and still treat me normally.

It’s greatly appreciated to be treated normally when one clearly is not.

Here are some photos from the event!

(From Left) Jacquie Rogers, Caring, myself
I’m holding a bunch of free stuff from Jacquie and Wendy Delaney (not pictured). Wendy made those earrings! They’re exact replicas of the cover of one of her books! 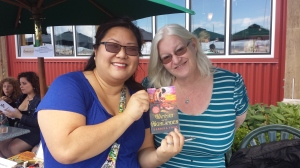 (From Left) Me, Sabrina York
Word of warning, her books are not for the faint of heart! They’re high-octane romance.

My haul of freebies!
…aaaaand that may just be a giant Star Trek mug off to the right.
#NerdGlassesOn, #MyNerdinessIsShowing

If you’re looking for more book events, I know of one that will be hosted during this year’s Emerald City Writer’s Conference for the public. It’s not a book sale. They’re GIVING AWAY FREE BOOKS!

Here’s a link to their event:
Passport to Romance: Free Reader Appreciation Event!

I’m working my way to get to the entire conference, but I’ll at least be at the FREE BOOK event!
October 17th, 2015 (Saturday)
6:00PM – 8:00PM
Bellevue Westin Hotel Grand Ballroom
(No cost to go, but bring cash for raffles!)

…and apologies to anyone else I missed who was there!

*Name has been changed for privacy.
**The Cranberry is the name of my car. Sometimes called the Cherry Tomato